Ramps (the edible type, not the skateboarding ones)

Early Spring means Ramp Season in the midwest. Ramps (Allium Tricoccum), a cross between onions and garlic, have a very short season - a few weeks - so you have to enjoy them while you can. They are the first green edible item to emerge after winter -- kicking off the new growing season. For seasonal eaters that means the days of root vegetables, root vegetables, and more root vegetables are over. There is a great local organization called The Land Connection, and its big fundraiser, recently held, is called RampFest. Local chefs cook up dishes highlighting ramps.

These are ramps and they make a great pasta sauce (more a ramp pesto). They are also great in omelettes. 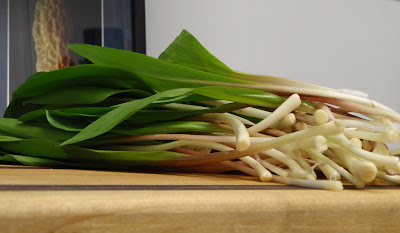 OK. So what do ramps have to do with Chicago? Well, according to a few sources, they are probably the reason for the city's name. The Potawatami word for wild onions (also skunk but we'll ignore that variation) is Checagou. Apparently there were a lot of ramps growing here in the "old days" and the area had a distinct aroma. One of the Riverwalk Murals memorializes the impact ramps had on Chicago (the ramps are at the top of the mural, above the boat). 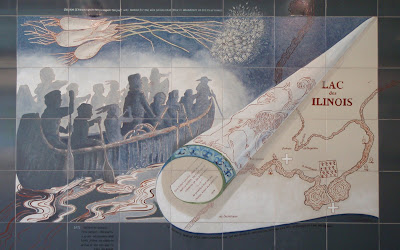 Posted by Daily Chicago Photo at 6:59 AM

You got me for a second there, over here in UK we call them spring onions. I am not a great onion fan, but I quite like a little in a sandwich.
Paul Leeds Photo Daily

I grew up in Chi-town and that is the story I was told in school about the origin of the city's name.