This sculpture, created by Milton Horn in 1954, is called Chicago Rising from the Lake. Amazingly, this piece of art sat in a storage facility for over 10 years until someone re-discovered it. The Department of Cultural Affairs brought it back to life and installed it on the Columbus Drive Bridge in the late 1990s.

It is a 12 by 14 foot bronze relief that weighs almost three tons. According to various websites, Chicago, shown as a female figure, is rising from Lake Michigan and is surrounded by items that are representative of Chicago's industry: a sheath of wheat, a steer, and an eagle. I'm assuming those are symbols for commodity trading, stockyards and meat processing, and financial institutions. 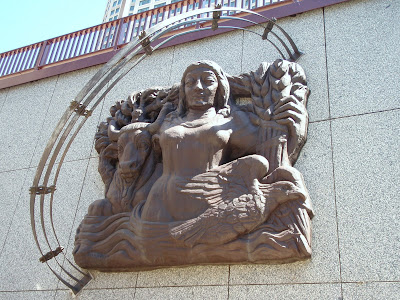 Posted by Daily Chicago Photo at 7:02 AM

Fantastic sculpture! I'm so glad that they re-discovered this treasure.

I'm surprised it went undiscovered for so long.

It's embarrasing to admit that I totally missed this artwork. Embarrasing because I lived on the corner of Columbus and Wacker until the fall of 2000. I'll have to look for it on my next visit.