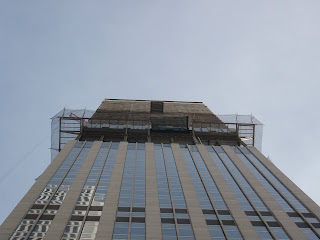 In and of itself, this is not that unique. A building under construction in Chicago. Big Deal. They're all over the place.

This one is a little different because the building was already finished - sort of. This is the Blue Cross Blue Shield Tower on Randolph and Columbus. The first part of the building (the first 32 floors) was completed in 1997. The building was specifically designed to be expandable - upward - when needed. Earlier this year they started working on the expansion. I understand they are adding another 24 floors and that it will be done in 2010. Perhaps because this is their corporate office, or because it is a high profile expansion (how many buildings add practically another building on top of an existing one?), but they did a very nice job on camouflaging the ground level scaffolding. You can't see it in this picture (perhaps that will be a future daily photo) but from the sidewalk, the metal scaffolding is hidden under gray boxes that look similar to the existing pillars.
Posted by Daily Chicago Photo at 9:39 AM