Not Too Cold for Pictures 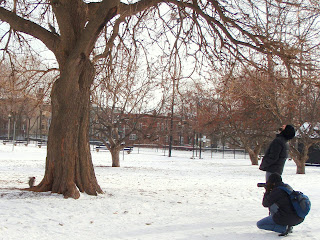 A few days ago I went through all the photos on the other Chicago sites in City Daily Photo. I wanted to make sure I wouldn't be duplicating too much. There were probably a dozen or so already there that I had included in my mental list of shots that would be interesting to include. So I won't be doing those. I also learned that you can stock up on pictures just in case there are days you can't or don't want to go outside.

So this weekend, despite the cold, I ventured out on a photography spree. I didn't stock up on many, though, because it started to feel too forced -- like I HAD to find a picture instead of capturing a scene to share.

At least I wasn't the only one out and about with a camera on a frigid day. I stopped to take a picture of something else in Welles Park. On the way back to the car I saw this couple also taking pictures. I like how she's taking a picture of the squirrel on the ground and he's looking up in the tree at the other squirrels - there were at least another four scampering around up there. There's another squirrel in the top left hand corner of the picture - in the crook of the branches - just ignoring this whole scene.
Posted by Daily Chicago Photo at 1:24 PM

Definitely create an archive library of standby shots. Nicely composed and I can feel that chill. Welcome to the club.