Look at That Sky 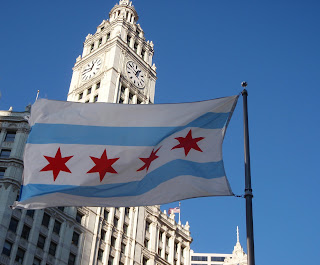 Yesterday the sky was such a beautiful shade of blue that I had to include it in a picture.

Plus, this gives me the opportunity to explain the symbols in the Chicago Flag:

And yes, I had to snap a bunch of pictures before I got the flag with just the right wave to it.
Posted by Daily Chicago Photo at 5:26 AM

I learned something new this morning. Very cool shot!

Beautiful photo and the info was great. I learned something brand new.

Good heavens! What a complex flag. Thanks for all that info. It was great.

this too will pass said...