I can't say it's the official birdwatching greeting, but you do get asked "Whatcha Got?" occasionally if you're standing in a park looking at something through binoculars. Usually by someone else with binoculars. (People wearing uniforms and badges tend to say "Miss, what exactly are you doing with those binoculars?")

It seems the Fall Bird Migration has begun to get active in the Chicago area. I was at the Magic Hedge (by Montrose Beach) and happened to turn around to see this sight. 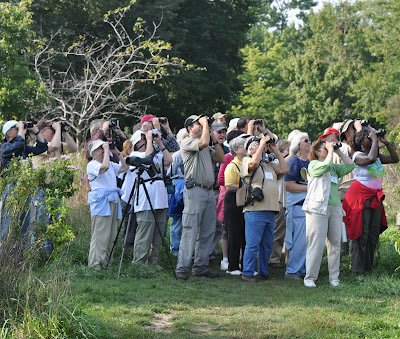 Not wanting to miss anything, I walked back and looked in the general direction as everyone else. There were a lot of warblers flitting about in a tree. Sitting at the very top (a rather dangerous location given that two Cooper's Hawks were in the area looking for a snack) was the immature bay breasted warbler, shown below. It doesn't have its full adult colors, like it will in the spring. In fact, most of the birds going through now won't look like they did in the Spring. That's what makes it challenging. 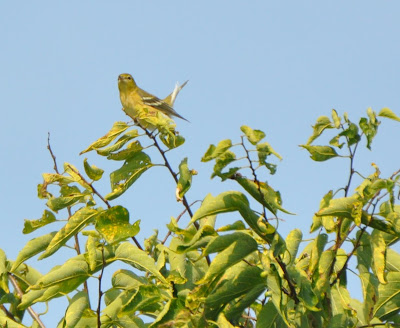 Sounds like a fun day! I've been inundated with ruby throated hummingbirds this week. I guess they are fattening up for their long flight further south.

These are great photos. I love the group with the binoculars all looking in the same direction.

awww what a pretty bird!

This warble, at my untrained eye, looks almost camouflaged amid the leaves. It's easy to understand that watchers (and hawks) have a better eye than mine...