You Want Me to Do What?

I'm not sure who this event was more traumatic for: the ducklings who had to take the plunge or the people who were watching.

Happened to be coming back from a bike ride just in time to see a mother duck lead her ducklings (and a parade of about 8 people) to the edge of the lake. Apparently it was time for these ducklings to start swimming and nothing - not even the 7 foot drop from the walkway to the water - was stopping that duck from getting the kids in the water.

It was rather amusing. The mother duck flew in the water and four ducklings - apparently the trusting ones - just jumped in after her. The next seven, basically, got pushed into the water by their "dear" brothers and sisters who were all jostling each other about as they peeped "Mom, you want me to do what? Jump seven feet into water? I don't think so." Each jump (or push) was followed by a collective gasp from the onlookers.

The last two did not want to go. One of the people watching helped reunite the last two with their family by nudging them further to the edge with a paper bag.

The last one looks like he's doing a reverse open pike. 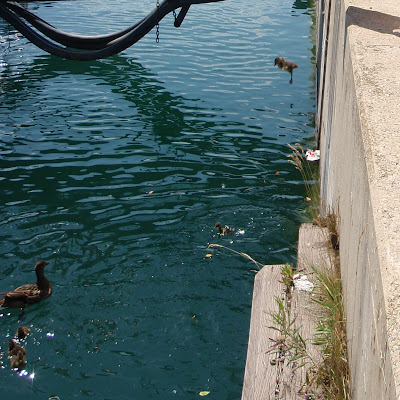 Just because those show-off brothers and sisters jumped
off this ledge doesn't mean I'm going to do that.
Dry land suits me fine. 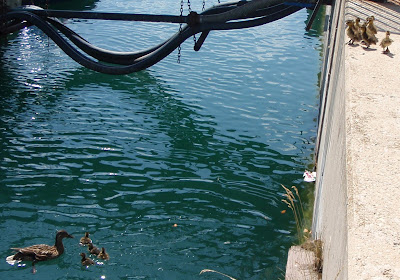 Together again. All survived the first swimming lesson. 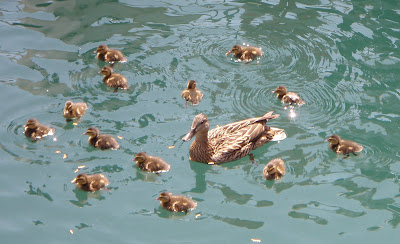 Posted by Daily Chicago Photo at 2:36 AM

Great set of photos, funny with a bit of drama!

How can anyone not smile looking at baby ducks? Love the brave little diver! Nice capture in mid-air.