The Ohio Street Beach is nicknamed "The Playpen" and, on summer weekend afternoons, attracts a lot of boaters who anchor out and socialize. On a recent weekend there were way more than the usual number of boaters there and the boats were rafting up (tying themselves together) in long chains. Clearly, to draw that many boats (and it wasn't really one of the prime summer weather days) it was an organized event. Had to do a little internet searching to figure out what was going on. Turns out it was the 9th Annual "Boat Party" sponsored by Chicago Scene Magazine. It's quite the wild party, apparently, having been described by the New York Times (no less) as "a ticket to Girls Gone Wild come to life". The local newspaper described it, more sedately, as "a floating Mardi Gras". The Chicago Police Department and Coast Guard boats do patrol the area to make sure things don't get too wild.

But that's the weekend. During the week, it is a much more serene spot, well-suited for overnight anchoring by cruising boaters or even "staycationers". 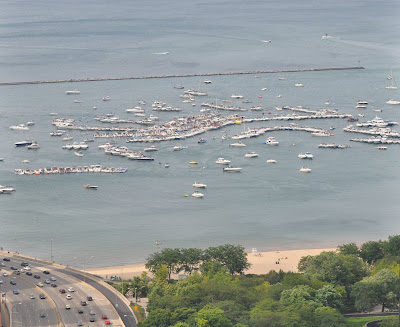 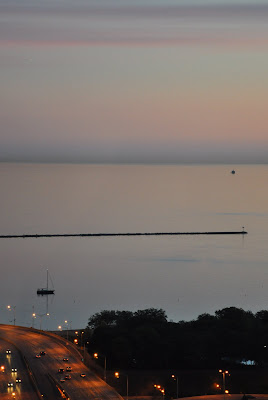 Posted by Daily Chicago Photo at 6:18 AM

Hard to guess is the same place... Interesting kind of party, I fon't know if someone here has yet got the idea...

Sounds like quite a party! I much prefer the last picture of the series.