Riding on a Rainbow

The Chicago Transit Authority has tried for years to come up with names for the 'el' lines that would make it easy for tourists and riders to decipher.

Those morphed into Congress-Douglas-O'Hare, Howard Dan Ryan (there was a short-lived and ill-fated attempt to abbreviate that as "Ho-Dar"), Lake-Englewood-Jackson (calling that "LE Jack" was similarly short-lived), Ravenswood, Evanston, and Skokie. Then Midway was added.

Its current incarnation is colors. In order of the above names, it is Blue Line, Red Line, Green Line, Brown Line, Purple Line, Yellow Line, and Orange Line. The Pink Line is the newest. Trouble is, we're running out of colors. If they add any lines, we'll have to use names like Chartreuse, Apricot, or Soylent Green. 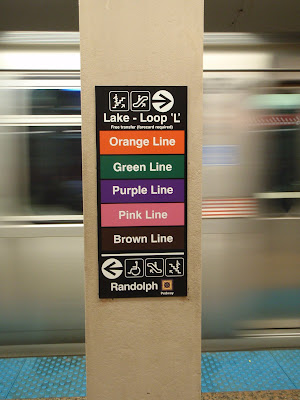 Your comments made me chuckle. I only remember the color names before pink was added. Pink just doesn't seem a good name for such heavy duty equipment.