There is a Haymarket Tragedy Memorial Sculpture at Randolph and DesPlaines in Chicago.

Plaques on the sculpture tell the story of the event. In short: On May 4, 1886, a public meeting had been organized to protest deaths of workers during a labor lockout (related to a strike regarding the eight-hour workday). The speakers addressed political, social, and labor issues. When police came to disperse the meeting, a bomb was thrown into the midst, killing at least eleven people. They never figured out who threw the bomb (or with whom the person was affiliated). Afterward, four of the organizers and speakers were sentenced and hung, one was killed in jail. Three additional organizers and speakers were sentenced but later pardoned. Over the years the Haymarket Tragedy (which used to be called the Haymarket Riot), has become a symbol for free speech, public assembly, organized labor, the eight hour work day, law enforcement, and justice. 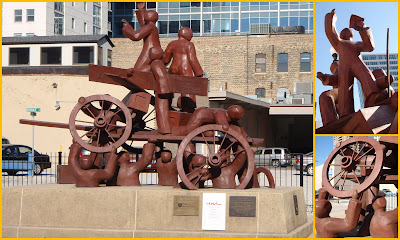 Posted by Daily Chicago Photo at 6:16 AM