Today is September 1st. In addition to being the start of meteorological Autumn and a new month, it's THEME DAY. This month's theme, chosen by vote of the City Daily Photo group, is

BIG
As it just so happens, Chicago is celebrating the 100th Anniversary of Daniel "Make No Small Plans" Burnham's Plan of the Chicago. If you aren't making small plans, they must be big plans! In addition to films, lectures and a musical (musical?!?), there is the Model City exhibit at the Chicago Architecture Foundation. It's a 1 inch:50 feet scale replica of main business district of the city from Halsted to Lake Michigan and Lake Shore Drive to Roosevelt. (According to the signage, at that scale, the average person is the size of a flea.) Every 15 minutes, the lighting mimics the sunlight on June 21, so the model city goes from a light pink (at sunrise) to golden to lavender to blue (at dusk). 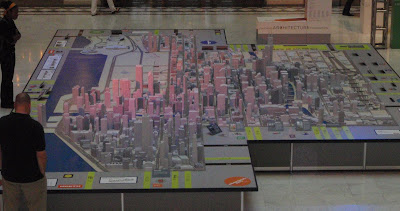 Even a model city needs a cleaning. If only cleaning up the real city were as easy as brushing a feather duster around the buildings ;) 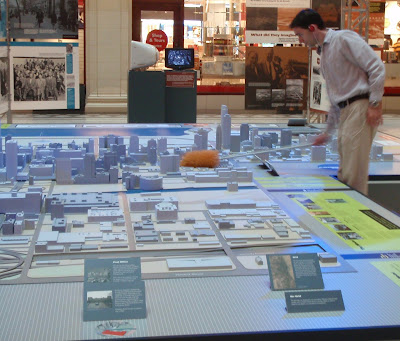 Click here to view thumbnails for all participants
Posted by Daily Chicago Photo at 1:30 AM

That's a funny shot of the Chicago clean-up. :)

A very good idea for the Theme Day. The clean-up thing is so funny...

That is really neat!

I like the concept of the lighting, so you can see the model in day or night...

Cleaning up is never easy, though I will say Chicago does seem to have come a long way in cleaning up since the 80s and 90s. I notice many of the bad areas are improving, and there seems to be alot of new condos popping up, and many projects that have been torn down...

At least that was my take from when I was there this summer...