Logan Square has a small Firefighter's Memorial Park at the intersection of Diversey, Milwaukee, and Kimball. (Milwaukee is one of a few angle streets in Chicago that create six corner intersections where they cut through the "normal" grid pattern of streets.) It is dedicated to three firemen who were killed battling a fire in February, 1985. The centerpiece of the park is a large, colorful mural depicting three firefighters as angels. 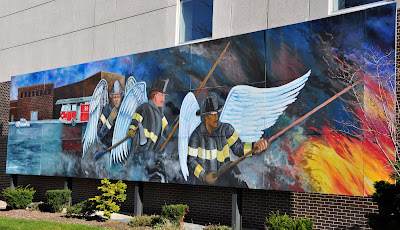 Posted by Daily Chicago Photo at 7:19 AM

What a beautiful memorial!

I have never seen this and it's quite beautiful.

Beautiful. It's so nice that their service to the community has been remembered like this.