Alright, the statue's name isn't really Bert. But when I zoomed in on the statue, one of the things that caught my eye was the staff in her left hand with the name/word "BERT" on it. Bert?!? Who the heck is Bert? I eventually figured out that the laurel leaf decorations on the staff must be hiding parts of the word "LIBERTY".

Anyway. The real name for this Jackson Park statue is The Republic. At 24 feet tall (plus another 10 feet for the base), it is a 1/3 scale model of a statue that stood in the area during the 1893 World's Columbian Exposition. According to the plaque, the gilded bronze sculpture was created by Daniel Chester French; the base is by Henry Bacon. It was originally dedicated in 1918 to mark the 25th anniversary of the Columbian Exposition. It's been restored, re-gilded, and re-dedicated to mark the 100th anniversary of the Exposition. 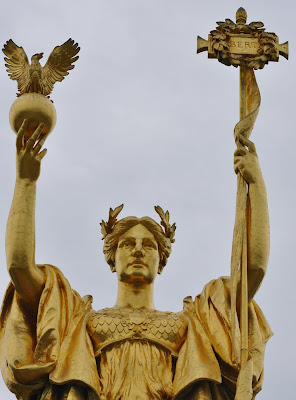 Posted by Daily Chicago Photo at 4:30 AM

One third? The original was humongous! Whatever happened to it?

You got me laughing with the 'Bert' thing :D

I did some quick google searches and haven't been able to find out what happened to the original. I do know that the original was gold leaf over plaster (which does not seem particularly durable). Also, the end of the Columbian Exposition was rather ill-fated. First, there was a small-pox epidemic. Next, right before the closing ceremonies, then-Mayor Carter Harrison was assassinated. Fially, a fire swept through the fair grounds and destroyed most of the buildings.