Eggers Grove (also called Eggers Woods) is part of the Lake Calumet area -- a wooded, marshy, and prairie nature preserve in the middle of a highly industrialized area of Chicago. It's in the East Side neighborhood on the southeast side of Chicago -- over in the land of the alphabet streets: Avenue A, Avenue B, Avenue C, etc. (Street names start around the letter K).

I'd never been there and was pleasantly shocked at what we found when exploring. Part of the Eggers Grove area is a lush green marshy jungle (see the second picture); the other part is an open prairie area.

In the marshy section, we found this Green Heron hunting for its lunch. I have to admit, I do wonder about Green Herons. Here it is hunting in this cloudy water marsh. Previously we saw one by the North Branch of the Chicago River (also kind of a cloudy water area). These type of birds must have cast-iron digestive systems. 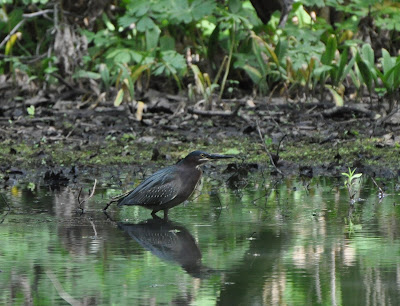 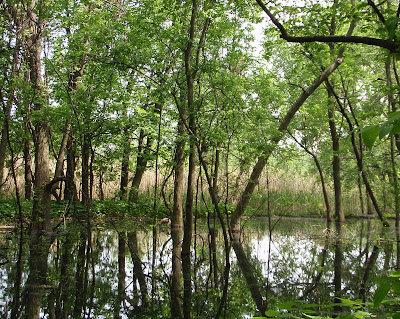 I have a few more pictures of the Green Heron at Eggers Grove at my bird-watching site, which is here.
Posted by Daily Chicago Photo at 8:09 PM

To be in an industrialized zone this wood look quite pristine and well preserved. Really a nice surprise.

Spotting the green heron is always an unexpected surprise. He's hidden on those short little legs with that long pointy beak, & his feathers blend in perfectly with his surroundings. Nice job!