Every year, the Newberry Library hosts a big donated book sale the last weekend of July. In conjunction, there are the Bughouse Square Debates in Washington Square Park.

A little history first. In the early 1900s, Washington Square Park was known as Bughouse Square and it was a popular free-speech space. Speechmakers stood on soap boxes to speak their mind and respond to vocal crowds. The Bughouse debates declined after World War II (spurred by crackdowns on socialists and communists) and had stopped by the 60s.

The Newberry Library started holding the debates again on their Book Fair weekend in 1986. They also re-enact an excerpt of the Lincoln Douglas Debates. This year's topics included Immigration Rights, Religion, the 2016 Chicago Olympics bid, Artificial Turf, Jean Baptiste Pointe DuSable's Legacy, and the Chicago Parking Meter Debacle. The best orator receives the Dil Pickle award, in honor of the Dil Pickle Club which was, in effect, an indoor Bughouse Square).

I thought the most interesting speech was given by Haroon Rashid from the Friends of DuSable organization. His summary of DuSable's life and contribution to Chicago was rather educational and, perhaps because of that, I don't think anyone from the audience yelled out any comments. The most entertaining was the audience responses to the Chicago Parking Meter presentation by "The Parking Ticket Geek". Audience comments included "Wait - could you stop for a minute while I go feed the meter", numerous "Get a bicycle", "cars don't kill meters, people kill meters", "Yeah, we have high parking rates ... but we get a fireworks show twice a week". 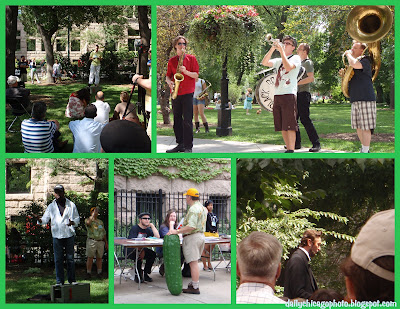