A Park in a Canyon (of Buildings)

I've shown the playground (the colorful little triangle in the middle of the photo) before - in January. It's prettier now that the grass is green and the trees have leaves. This is an expanded view that shows the playground is part of a fairly new park in Chicago. Lakeshore East Park opened in 2005 and is supposed to be the city's only Wi-Fi Park (I'd forgotten about that - have to check that out). The park is a pretty little green space in the middle of a canyon of tall buildings. The crossing arc-shaped sidewalks in the park mimic the roof design of one of the first buildings that was built in the Lakeshore East development. 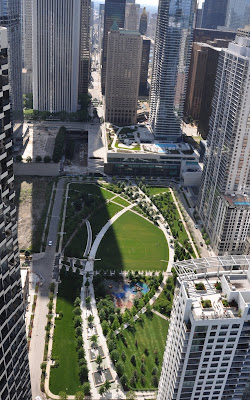 I've been trying to get a perspective of where this is located but I'm having trouble. I recognize the Amoco Building and the Fiarmont Hotel but I think there are a lot of newer buildings around that I don't recognize. Is this located where the golf center used to be?

I really have to get back to Chicago and take a look around.

Yes, it's the where the golf course used to be. You need to check out what's been happening in "your old neighborhood". The south Loop, too, had a mini building boom and the west Loop is heavily residential with many new restaurant.

Love seeing the green with all of the buildings!

They have started work on our little pocket park here in Printer's Row. I can't wait to see it finished.

This is a great shot! I love your view of it as being in a canyon. That's interesting that they used an old design for the walkways. What a cool idea!

Thanks for stopping by my blog and leaving a comment!