Stumbled upon this window display on State Street in the Sullivan Center (which was previously the Carson Pirie Scott Store). The display is called Zero Zero and is named after the address coordinates of its location at State and Madison (which is 0 North/South and 0 East/West and the starting point for the city's address system). According to the website it is a "re-centering" project, co-sponsored by the Chicago Loop Alliance and the IIT Institute of Design. 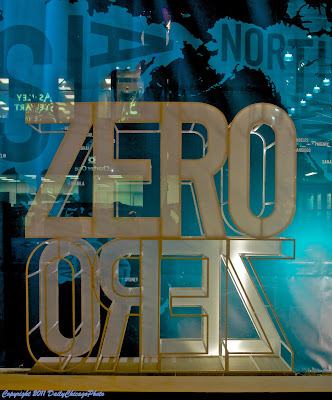 Posted by Daily Chicago Photo at 1:16 AM

Sounds like an interesting project but, all I could think of when I read your words was "what happened to Carson Pirie Scott?" I still wear a coat I bought there! I need to get myself back to Chicago and check out all the changes.

CPS closed their State Street store in '07. It's now being re-habbed into the Sullivan Center (in honor of the building's designer Louis Sullivan). There's some offices in it and the School of the Art Institute has some space in it. Not sure what will be brought into the main first level.

I just like the graphic design and the colors! Beautiful work!:)