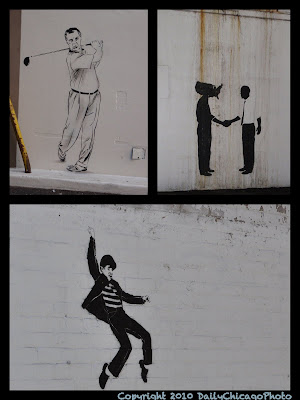 Today is the first of October so that means it is Theme Day on City Daily Photo. October's theme, chosen by vote of all the people in City Daily Photo, is Graffiti.
Now this was a tough theme. Chicago banned sales of spray paint and indelible markers back in 1995. So the only graffiti we get is done by tourists and suburbanites and - let's face it - they save their best stuff for their hometowns. Yeah, you can find the random declarations of "A.B. Loves C.D. 4-ever", gang tags, and other less-than-enthusiastic exclamations done with Sharpie markers, but there's not much in the way of really deep thoughts like "Kilroy was Here" or "Clapton is God".
I have found these three, though.
The one on the top left is an old photo of graffiti that showed up under Lake Shore Drive in late 2008. I found the graffiti shown in the bottom photo in the Lakeview Neighborhood earlier this week. It seems to be Illinois' former governor striking a very Jailhouse Rock Elvis-esque pose. The one at the top right is interesting. I walked over to take a photo of the blank square that was painted over a graffiti portrait of the former governor in a striped prison outfit. (I was going to lament how if you don't get a photo of the graffiti when you see it, it could be painted over quite quickly.) But I found this graffiti portrait instead! It had to have been done this week. I'm pretty sure it is commentary on the mayor's decision not to run again next year.
None of these seemed to have any signature, but they must have been done by the same person. And that person seems to have a unique political sense of humor.
ADDENDUM
OK, after a few commenters mentioned that these looked like the work of Banksy, I did a little more internet searching. Although Banksy was apparently in Chicago in the Spring, I think these may actually be the work of a School of the Art Institute graduate known as CRO (aka Ray Noland). He seems to do a lot of graffiti related to Chicago politics and a number of his works were at the same location of the Golfing Mayor piece.
Click here to view thumbnails for all participants
Posted by Daily Chicago Photo at 1:10 AM

The one playing golf looks so real.

My Bangkok Through My Eyes

From the thumbnail, I thought they were celebrities. I like this political humor better.

Goodness how is this policed? The secon image has a banksy feel to it

No spray paint and permanent markers and no feeding the pigeons either. What's left for fun around there? Just kidding of course! These are all wonderful photos for Theme Day.

Good reading, off to google now.

Have a wonderful weekend :)