Must be something about early March and the almost Spring conditions that brings out some pretty sunrises. Purely coincidentally, I posted a sunrise photo last year on March 3, too. The sky looks springlike but, as you can see, the marina is still full of ice and snow. And, they are predicting 50 degree temperatures for later in the week (which was the same forecast for "later in the week" last year, too, according to my 2009 post). 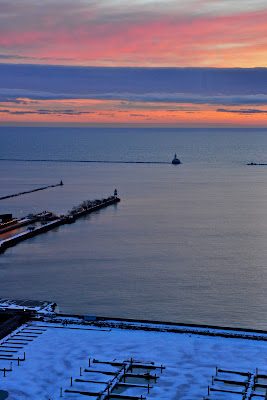 Posted by Daily Chicago Photo at 8:32 AM

Great colors here. It's been a long and cold winter, hopefully spring is around the corner.

It's so pretty! I love the lighthouse too. I took way too many pics of it when I walked to the end of the Navy Pier last December, but I couldn't help myself.

I don't think you can ever have too many photos of a great lighthouse ;)

Fabulous coloration, especially in the foreground.