I've always wondered about this big banner that hangs on a building in the Near North Side neighborhood. It is a list of names (I now know there are 69 names and a blank line).
There were some patterns: 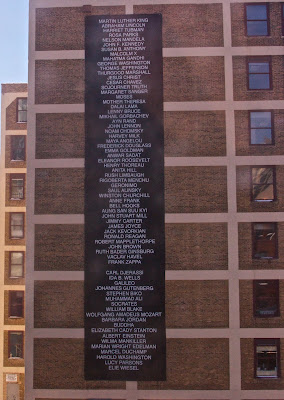 But I could never come up with any real theme. And to make things more confusing, there were some names that I wouldn't necessarily expect to see on the same banner. Jack Kervorkian and Geronimo? Frank Zappa and Henry Thoreau? Rush Limbaugh and Robert Mapplethorpe? And did that blank line mean someone got kicked off the list?
It took a bit of creative Googling but I now know it is The Freedom Wall. It was created by a Chicago artist named Adam Brooks. His goal in creating the banner was to "represent the idea of freedom in all its potential interpretations". He developed the list by getting votes from responses to e-mails, polling surveys, and letters. People with the most "mentions" in the responses got on the banner, which is shown in order of votes/mentions. The blank line isn't someone who was deleted but represents the idea that no one person represents "freedom".
Posted by Daily Chicago Photo at 2:10 AM

Wow, very interesting. Thanks for doing that research and sharing it with all of us.

This is Adam Brooks, the artist. If anyone is interested in receiving a pdf of the booklet that I produced in 1994 to accompany the work itself, please e-mail me at adam@adambrooks.com.