It's Deja Vu All Over Again.
Remember a few weeks ago when that cupcake shop opened and there was a line so I took a photo and posted it? Well, I'm walking down the street and I get this deja vu feeling because there's the now-three-week-old cupcake place and there's STILL a line. I won't stand in a line for a cupcake but I am now rather curious about them. Eventually the line will go away, right? 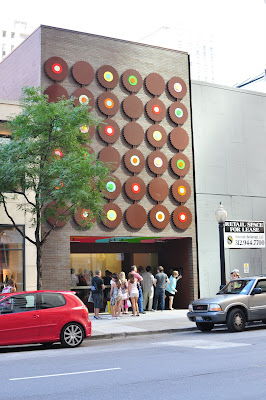 so, did you get a cupcake?

That's funny. So next time are you going to wait to check with someone who comes out and see what's so great about these cupcakes?

One of these days, the line will disappear and then I'll go try one. ;)

This reminds me of a lady who came up to me at MCA and wanted to know if the "cupcake truck" had already left. I had NO idea what she was talking about which seemed to offend her. I wonder if it occured to her that she was arguing about a cupcake truck at a Farmer's Market....

On the upside - it looks like the line is getting shorter... :-)