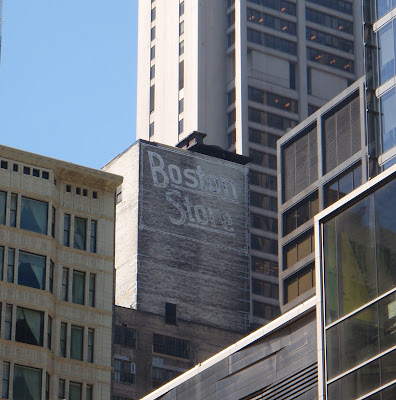 Painted advertisements on buildings are an endangered species. Either the building gets torn down or another building goes up next to it that hides these old time ads. I think they are rather interesting and provide a peek at the past.

This ad for "The Boston Store" stands out amid the newer buildings in the Loop. I'd never noticed this ad before and had never heard of the Boston Store. So I "googled" it. It had quite the history in Chicago.

According to the site www.chicago.urban-history.org, where you can see an antique postcard of The Boston Store, the store was owned by Charles Netcher. He named it The Boston Store because he "hoped the New England city's reputation in merchandising would add credibility to his establishment". It expanded quickly in the late 1800s and eventually took up the corner of State and Madison. Charles Netcher's wife, Mollie, turned it into a full service department store and it was a competitor of Marshall Field's and Carson Pirie Scott. It had a cigar factory on one floor that produced three million cigars annually. It also had "a post office, a Western Union office, a savings bank, a barber shop, a first-aid station, several soda fountains and restaurants, and an observation tower 325 feet above street level. ... For the four thousand Chicagoans employed by the firm, there were private reading rooms, employee lunchrooms, and a full-sized tennis court on the roof."

By the late 1930s, business had begun to decline, apparently because Ms. Netcher didn't modernize the store or its business ways - she didn't expand to the suburbs and kept a cash-only policy. The store closed in 1948.

The building was renovated in 2001 and now has a Sears store on the first few levels.
Posted by Daily Chicago Photo at 6:16 AM

I think you might be talking about the building I worked in when I was on that assignment in Chicago. We entered from the Dearborn side and I think we were on the 8th & 9th floors. I do know that there is a Sears store at street level now. I worked for First Chicago Bank which became Bank One while I was there and is now Chase Bank. The bank took up several buildings in that area and I imagine it still does.

A very interesting story about the Boston Store!