Technically, yesterday was Opening Day for the 2009 Baseball season. Today is opening day for the Chicago teams. Well, one of the Chicago teams. The Chicago White Sox were supposed to play their home opener today. The weather forecast (snow and 30s) resulted in the game being postponed. (I didn't understand that at first - postponing the game because of a forecast. It may not actually snow. The early decision was made to get the make-up game quickly rescheduled for Tuesday April 7).

The Cubs' season opener is today in Houston. Their home opener will be next week. Cross your fingers there won't be any snow delays. (Wouldn't be the first time: It happened in 2007, 2003, and 2001.) 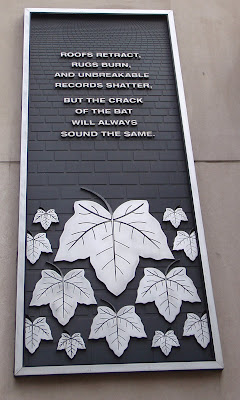 Posted by Daily Chicago Photo at 6:56 AM

Yes, opening day. We just finished Spring Training and we have Cubs tickets and great seats. it is always a fun Spring event in Arizona. I am really glad you enjoyed the Crazy 88 butterfly! It truly was real and free in the wild. And you are right, the colors must camouflage it.