The snow that came in this past weekend was really heavy and sticky. But since it was very windy, it didn't uniformly stick on things. Such as in this picture, where only the north side of the columns, light posts, and gazebo in the Bloch Cancer Survivors Park are coated with snow. It created an interesting contrast. It had the look of a shadow but wasn't. By the way, this park used to be the Old S Curve, before Lake Shore Drive was straightened out in the mid-80s. 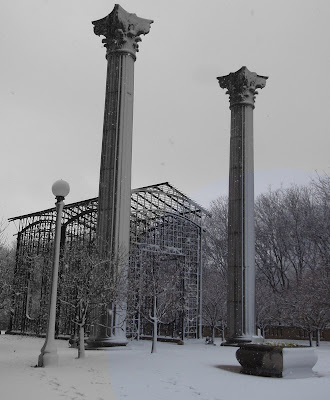 Posted by Daily Chicago Photo at 8:39 AM

Hi,thanks for visiting my blog. I've enjoyed going through yours. I particularly sympathized with the shot of the crocus in snow.